Main Class (9 years and above)

Learn the art of self-defence, get fit and enjoy a social family friendly experience, with Taekwon-Do in Kettering.

Nothing to pay, just come along on any day and try.

Taekwon-Do was originally developed for adults, yet over the last few years there has been a rise in children taking up the art and, for good reasons. Taekwon-Do teaches respect and discipline.

Adults and Children alike learn Taekwon-Do through both physical and mental training. As a club, we follow the Tenets of Taekwon-Do which are:

Taekwon-Do is composed of fundamental movements, patterns, dallyon, sparring and self-defence techniques, that are so closely related, it is impossible to segregate one phase of instruction from another.

There is, in fact, like the Deity, no beginning or end. A student will find that they will have to return, time and time again, to the beginning fundamental movements in order to perfect advanced sparring and self-defence techniques.

Each fundamental movement, in most cases, represents an attack or defence against a particular target area or definite action of an imaginary opponent or opponents.

It is necessary to learn as many fundamental movements as possible and fit them into complete proficiency, to allow the student to meet any situation in actual combat with confidence.

The patterns we practise in class, actually place the student in a hypothetical situation where they must avail themselves to defence, counterattack and attack motions, against several opponents. Through constant practice of these patterns, the attack and defence become a conditioned reflex movement.

Power and speed must be developed to such a high degree that only one single blow is needed to stop an opponent, so the student can shift stance and block or attack another opponent. Each pattern is different from the other in order to develop reaction against changing circumstances.

Once the basic patterns are mastered, the student then begins to physically apply the skill obtained from fundamental patterns and movements to sparring against actual moving opponents.

Collaterally with sparring, the student must begin to develop his body and toughen his attacking and blocking tools so he is able to deliver maximum damage in actual combat.

Once a student has applied himself to fundamental movements, patterns, sparring and dallyon, then the time has arrived for the student to test his coordination, speed, balance, and concentration against spontaneous attacks: ie. self-defence.

Students will constantly find themselves returning, however, to their fundamentals even when they have achieved the highest possible degree of self-defence techniques. As in military training, Taekwon-Do progression follows a certain parallel: 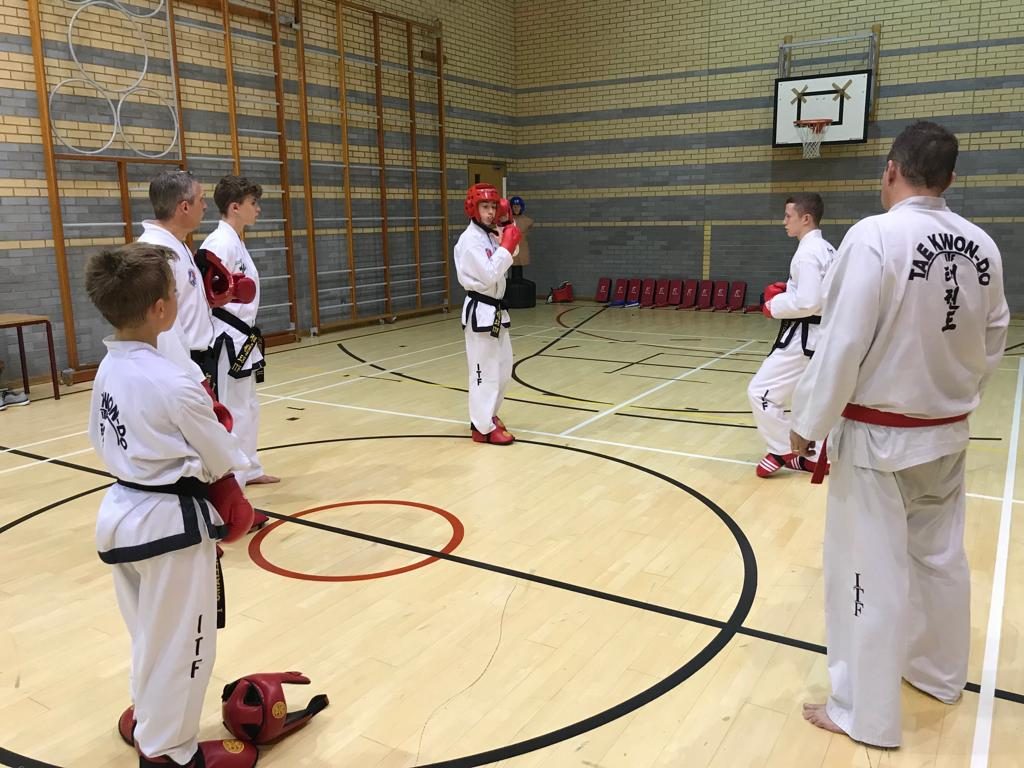